Thank you for reading!

Use your Subscriber Number to activate your included online access. 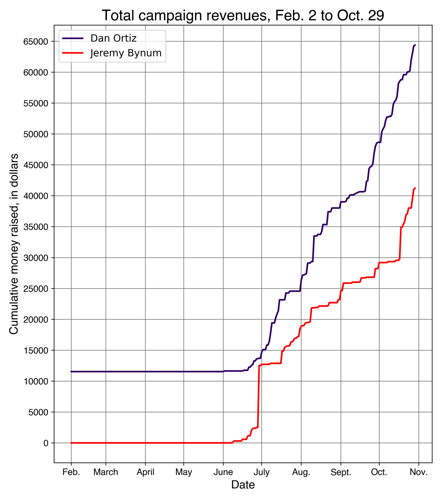 One week out from the November general election, incumbent Alaska House Rep. Dan Ortiz has a strong fundraising lead over his opponent Jeremy Bynum. As of the latest batch of campaign finance information reported to the Alaska Public Offices Commission, Ortiz has raised $64,399.85 across 258 contributions, while Bynum has raised $41,240.28 across 113 contributions.

(Eight contributions were not included in this analysis, all for contributions to Ortiz’s campaign that were eventually rescinded or refunded due to errors.)

Bynum’s contributions from individuals overwhelmingly came from constituents of House District 1, comprising Ketchikan, Saxman, Metlakatla, Wrangell and Coffman Cove. Just shy of 96.5% of Bynum’s revenue from individuals came from people who live in the district, totaling $15,720.35.

Of the money Ortiz raised from individuals, a much smaller majority (62.4%) came from House District 1 constituents, totaling $20,675.89.

Ortiz’s higher share of contributions from individuals outside House District 1 reflects the connections he’s made serving four terms in the Legislature: Several of those contributions came from his colleagues. The following noteworthy individuals contributed to his campaign:

The Daily News has collected the Alaska Public Offices Commission information for contributions to both Ortiz's campaign and Bynum's campaign from Feb. 2 through Oct. 29 in spreadsheets that can be accessed in the article's accompanying images.